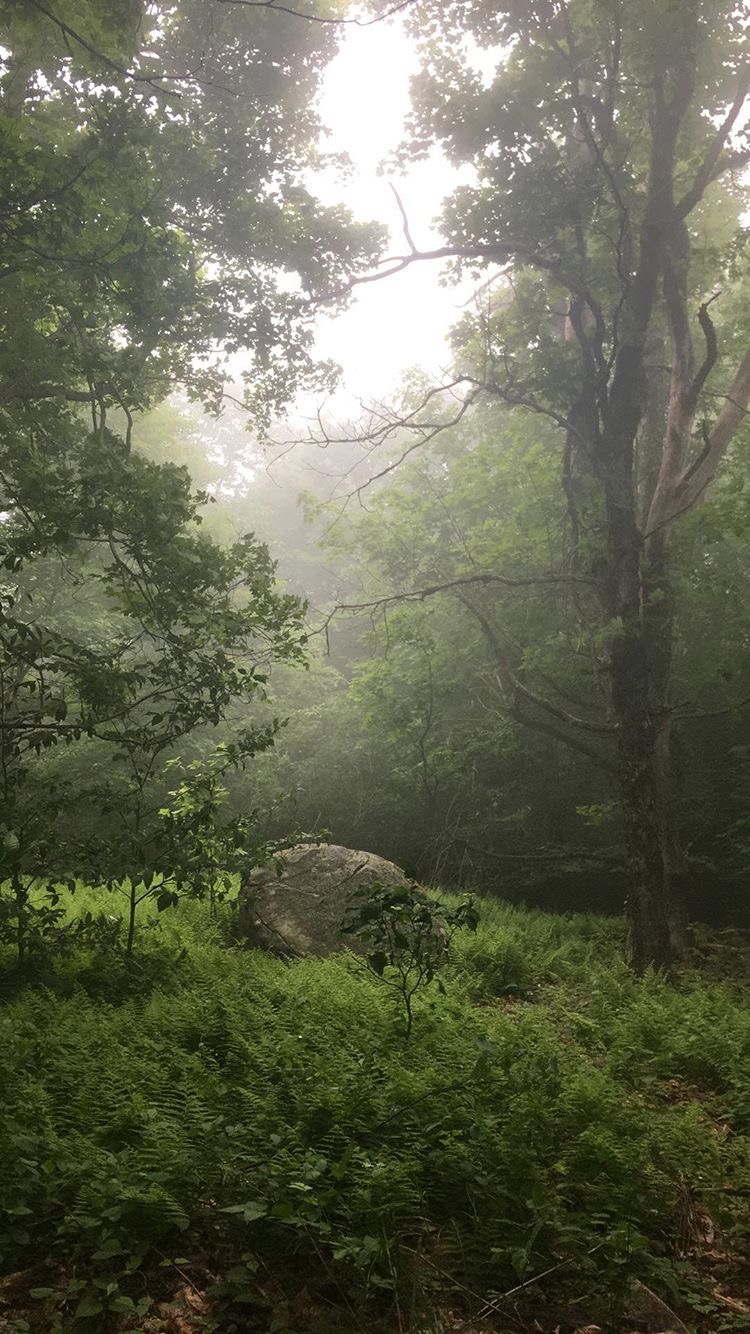 Religious Baggage: All You Who Are Heavy Laden

People who grow up without religious baggage fascinate me. Like, what did you do– just grow up and explore? And then decide for yourself what you believed from what you learned and observed? These are honest, real questions wondered with awe and respect. Also, deep envy. Did you try out various churches as adults? Or did you read books? Maybe the trees guided you? Please tell me it was the trees. I can so better understand if you tell me something in nature led to you knowing God.

My religion, the deep inner faith inside my soul, began with trees. Specifically, a circle of birch trees that grew in a neighboring pasture near the farm I lived on as a child in Upper Michigan. A wanderer, I strayed as though pulled by a magnet one day, past the grove we called “the park,” past the patch of tiger lilies, past the curve in the half-mile gravel drive. I belly scooted under the electrified fence and crossed Stiglitz’s field to that circular cluster of trees and when I stood beneath their crowns and looked up into the leaf rimmed blue sky I felt surrounded by the white light of angels. I felt the warmth of God the creator holding me, beaming pleasure and love at the joy of my being. I was seven years old.

Then, we moved to Florida and really went to church. Not just twice on Sundays– six days a week I had a church-related activity for all of my teenaged years. I’ve been Southern Baptist, Reformed Baptist, PCA Presbyterian, Reformed PCA Presbyterian, excommunicated and formally shunned by the RPCA church, and then converted to the Orthodox Christian Church of America. I am starting to realize that many people in my life have only a glint of understanding what the names in my previous sentence mean, and even fewer, the nuances between them.

Sometimes people choose their religions because of who they marry. Sometimes I meet people who went to a church on Easter and Christmas but not really much in between. They have charming ideas about church. Pretty stained glass windows and holiday masses and maybe southern Sunday picnics. They don’t understand where I came from or why I made the choices that I did.

I had a trauma therapist once who suggested raising your children in church gave them a native faith tongue. And then, when they are young adults exploring their own thoughts and feelings as they relate to religion, will have a vocabulary and syntax in their spine. They’ll have ideas to bounce others off of and see which they believe. They also, will understand the cultural references of predominant world religions. “A working knowledge of bible stories is helpful, simply from an intellectual standpoint,” she said.

This is sometimes how I discover someone has no religious baggage, bible stories.
“It’s like the widow’s mite,” I’ll say. “You know, how she always had enough and still gave. She had resilience.”
“No, I don’t know what you mean,” they say.
“The widow’s mite, you know, in the bible,” I nudge. “Or, how about the widow and the prophet, Elijah? In the Old Testament?”
They shrug or shake their head. “I don’t really know that many bible stories. Just the big ones.”

The “Big Ones” are usually a working knowledge of basic creation theory (although anyone entrenched in evangelical christianity will gag on the word, “theory” used there), Adam and Eve with an apple, possibly the flood, the nativity, the crucifixion, and the resurrection. A story buried about a poor woman and a prophet in the Old Testament isn’t going to make the list. They probably don’t know what an Old Testament is.

And suddenly it will make sense, how the person I’m talking to doesn’t seem driven by shame. Their heels aren’t chased by wondering, “But what will everyone think of me? What will happen to my salvation?” When someone abuses them, they leave, and would never stay just because of what the bible has to say about divorce. They don’t know what the bible says about divorce: they just know an abuser isn’t going to treat them that way. Maybe there’s some psychological work on self-worth and assertive strength they need to do in order to break free but it’s not based on their understanding of eternity or heaven or hell. They don’t expect to be shunned by their entire world for failing or for asking questions or for being human. Increasingly, these are the same people I interact with who can’t for the life of them fathom why American Christian women would vote for someone who talks about grabbing women by the pussy, or why they aren’t voting at all. These are people I’ve met on “the outside,” and they are all intelligent and most often, full of love and compassion for mankind.

My therapist, when she said that, was trying to comfort me. I’ve given my children a native religious language, although in Christian circles it would probably be considered more of a mixed-bred mutt than true monolinguality. We’d not been exactly brand-loyal. At the point I was sitting in her office, I was just starting to unpack the role religion had played in my marriage, a toxic, dangerous situation I’d remained in for far too long. I, like my parents, had meant well in bringing my children up in the church. You probably know the cliche about the road to hell and good intentions. The very faith that was supposed to sustain me had in fact, manipulated me into sustaining a system using guilt, shame, and control as fingers. It was the institutions that mattered to them most, not our health, humanity, or healing. It taught me how to pray to be saved; not to get my ass off the pew and save myself. And let me tell you, when someone is about to bludgeon you with firewood, you’d better get up off your ass and get you and your kids out of there.

I was like a teeter-totter, the wooden kind of playground equipment that would land a kid on their butt if the person on the other side was mean. The goal was to live in the balance. On one side: the beauty of structured religion. This included the rich tradition, the stability of shared language with a community, the reasonable attempts to understand the mysterious grandeur of Holy God. A source to pray to and ask hard questions. Someone to believe in when life gets dark, a faith unashamed. A good place to go when we die. Love to the death and rainbows and miracles.

On the other side: bundles of baggage. Whole trunks of societal pressure, guilt and shame. The bloodied and ground meat body of Christ. The wretchedness of being born filthy. The anxiety around the stickiness of the Sinner’s Prayer. The deafening sound of a sudden trumpet, announcing the coming Christ and the sure-fire vanishing of those who truly believed, of which I probably would not be a part. The lake of fire, with flames kissing and licking my feet as I tried to hold the balance of all this weight. I knew the aspects I hated from my upbringing in the church. I was beginning to comprehend how much of my life’s value I’d placed on holding this entire weight of this heavily laden load and I was breaking, splintering into two. The hulking burden of my Christian effort was snapping me in half.

This is where the grace of Jesus should enter in, by the way. He is said to relieve burdens. Carry the load. Scoop me in his arms and carry me home. You have no idea how many hours I’ve spent sobbing and begging on my knees for that grace to come lift this burden off of me. Jesus said in Matthew,

“Come to me all you who are heavy laden and I will give you rest. Take my yoke upon you and learn from me, for I am gentle and humble in heart, and you will find rest for your souls. For my yoke is easy and my burden is light.”

But, oh, dear heavenly Jesus, what your followers have done in the centuries since you said that is hardly easy and light. Eventually, I had to just set that down. The Jesus of Matthew isn’t in very many churches today.

It occurs to me that I’ve used a wooden teeter-totter as my metaphor for the religion I most closely know. That the cross of Christ was made of wood. That wood is consumed by fire and burned to ash. That wood comes from trees. And that trees are the deepest, most honest conduit for spiritual revelation I’ve ever carried in my heart. I wonder what that means.

When I did set it down, when I gradually found air in my lungs to pass over my voice and make sounds, when I found words to write from my heart, I found myself back beneath the trees. Not those certain trees, now surrounded by great northern white pines and fifteen hundred miles from where I currently call home. I can see them from above now, thanks to Google Earth. But really, almost any tree. When I sit within creation, when I notice how the tree line is a fractal of the clouds, when I sit beside the ocean, when I add my tears to the salty waves, when I look another human in the eye, when I stop and listen to the birds— I feel surrounded by angels and feel the warm, smiling love of God wrapping arms around me, with joy at my being.

I’m aware there’s an old knowingness in my eyes. I give to it my curiosity. Did you explore? Did you read about it? Did you have an experience? Tell me what it’s like to be your kind of human and I will write it down. Tell me your story. I think that’s what I’m here for: to write the story down. Something happened to me one day in the trees and every hike thereafter. Birch trees, with bark of paper. I’m here to write it down. I am finally finding rest. 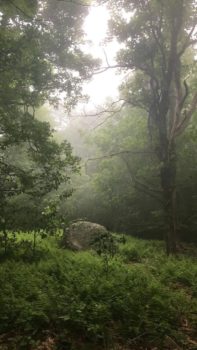 O Lord, how lovely it is to be your guest:
Breeze full of scent; mountains reaching to the skies; Waters like a boundless mirror,
Reflecting the sun’s golden rays and the scudding clouds.
All nature murmurs mysteriously, breathing depths of tenderness, Birds and beasts bear the imprint of your love,
Blessed are you, mother earth, in your fleeting loveliness, Which wakens our yearning for happiness that will last for ever In the land where, amid beauty that grows not old,
Rings out the cry: Alleluia!
– Kontakion 2 of The Akathist in Praise of God’s Creation

I think this isn’t gendered. However, historical

I was young when I realized what my church was tea

Holding space for your stories is a humbling respo

I was young and vulnerable when my first baby was

It’s so easy to dismiss the Duggars as “fringe

We’re talking about the parentification of older

It’s not like they make us guess. Roe v. Wade is