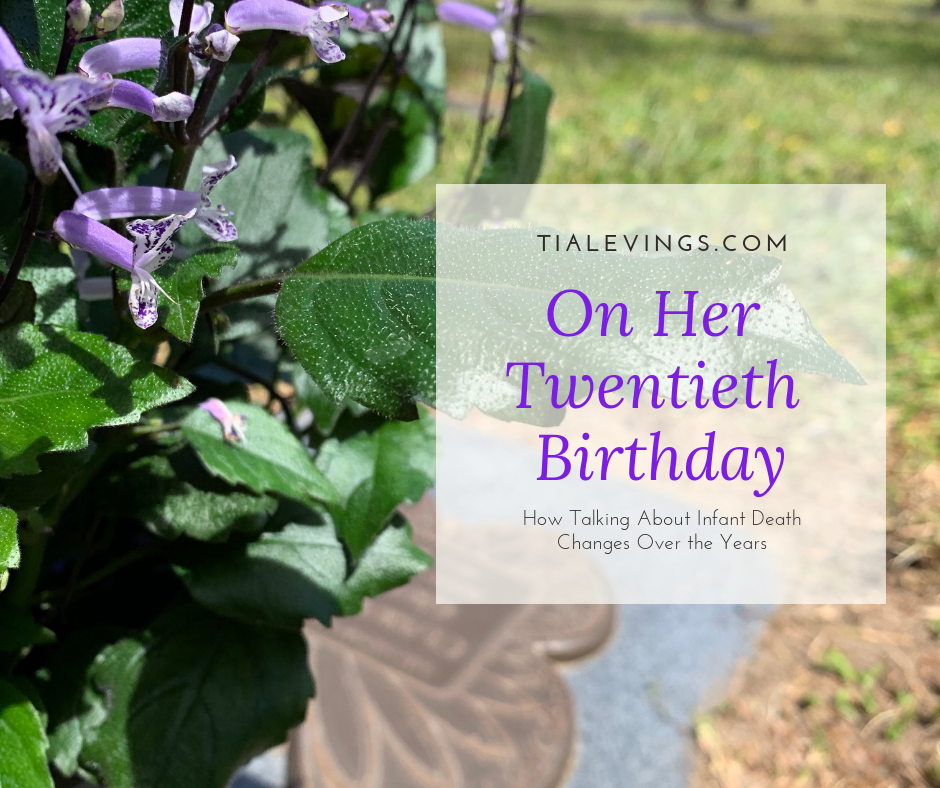 On Her Twentieth Birthday: How Talking About Infant Death Changes Over the Years

I used to post my children’s birthdays on Facebook. Collages of photos: my baby as an infant, my baby as a toddler, my baby missing front teeth, my baby kicking a soccer ball, my baby graduating high school. My baby not a baby anymore, but all grown up. I don’t do that for any of them much anymore. My kids aren’t Facebook fans for the most part and at some point collages of adult children through the ages becomes a little weird.
In 2019 my children are twenty-three, twenty-one, eighteen, fourteen, and eternal. March 29, 2019 my eternal one would have been twenty. That’s today. Twenty years is a long time. Grief has gone from a moment-to-moment heartbreak to a perennial visitation, the strongest bloom coming each and every Spring.
She had blueberry eyes and thick red hair, the only of the five born with very much of it. She got her first tooth at three weeks. She was born full term, fat and beautiful. Chances are, if you know me, you also know her name. I talk about Clara all the time and often, in the most ordinary of ways. She’s my very own BC: simply put, I was one person Before Clara and another person, after. Except also, if you really know me, you know there hasn’t really been an after. She has never ceased to be. In fact, I can almost hear her laughing at that now. Her visit here indelibly mattered and I will always tell her story.
Talking about Clara is how I survived losing Clara.
It’s fairly ordinary throughout history to “lose” a child. Funny term, that. I lost her body. I lost her form, her scent, her collage of birthday photos and the passing cakes and candles from each year. She was inside me when her soul came into being. I knew her. I knew she’d change every single thing about me in more complex ways than how children typically change their parents. The trauma of her birth, the weeks of medications and surgeries, her whole life spent inside of a Cardiac Intensive Care Unit— that single afternoon when I took her outside to the ivy and the first butterfly came— it all changed me. And then her body died and somehow, though I denied it at the time, Clara came back inside. She’s inside me still.
And everywhere else as well! Last week I was having a hard time of life, wrestling with a situation and a decision, feeling drained and empty and lost. I spent most of a week swinging on a garden swing my husband bought me. I absorbed kind sunshine and watched as the birds worked out spring. When here came a butterfly and it landed on my knee. I smiled.
“Hey there, Clara-beara. I needed you today.”
She assured me everything would be okay. And of course, she’s always been right.

“I carry your heart with me (I carry it in my heart) – E.E Cummings

It’s important to say she’s not a baby anymore. Nor is she a young woman. Her body died at nine and half weeks, the night before we were to be released to go home from Atlanta to Jacksonville. Earlier that day I put her telemetry bag on my shoulder and took my swaddled little baby outside. I wanted her to feel the sun. I wanted her to breathe real, unconditioned air. I wanted to sit with her in the grass and show her Springtime in Atlanta. It was May 26, 1999.
I’ve never told this part of the story before.
Egleston Children’s Hospital has a little garden. There’s a winding paved pathway and butterfly plants. I’m sure it was provided by some wealthy donors who will never know my child’s name. Maybe it’s different now— the hospital looks like its expanded. But the garden I knew was shaded and lush, comforting and accessible. I used it often to “catch my breath” on trying days full of her beeping monitors and fellow patients, many of whom weren’t making it through. Bringing her there was a secret hope of mine. When she was released from the CICU to the step-down unit, an ordinary room, and there was talk of maybe getting to go home, I asked right away about if I could take her outside. I knew “home” might be to our home hospital. I couldn’t stand the idea of her never being outside.
“This is a tulip poplar.”
“This is ivy.”
“This is green grass.”
“That is a butterfly.”
I was just any other mother talking to her child, showing my baby nature. No one who saw us there knew her heart was broken. They saw a young mother with a tiny baby in a pink blanket and green gown sitting on the lawn with a butterfly. We didn’t know it was a harbinger but I think that maybe, Clara did.
She watched it all alertly: attentive, keen, and tired. When I look back on the photos from that day, Clara’s eyes are tired. She was working very hard to stay there with me. As the day passed, her back arched more. She breathed through her mouth. She grunted. The respiratory therapist came and went. The nurses watched. Since the moment she’d been born she’d been so carefully watched. It’s hard to slip away when so many are always watching.
She fell asleep that night on my chest. At midnight, I put her in her crib. Only moments after, when I was sleeping hard, the nurses burst inside and told me. A light was flashing. A code announcement on the speaker. I heard our room number. The code was for our room number. Clara was code blue.
I wish now I could go tell myself she wasn’t really leaving. I don’t know that I would have even heard. I climbed the wall. I wailed and tore my hair. I fell into the nurses arms. I lost my baby. I lost my child. The thing everyone says they can never imagine. It happened to me. The prayers had failed. The doctors had failed. All of heaven had failed. Children aren’t supposed to leave their mother’s arms.
They do though. Even the ones who live. Babies grow and lose their teeth and their muscles lengthen and their voices change and one day they say, “Mom, it’s time I moved out.” “Mama, I’m joining the navy.” “Mom, I’m getting married.” They move across the country and start working on their dreams. They take risks that contribute to worry and greyed hair. They shine with the vibrant life they’ve been given. Children leave their mother’s arms. Babies don’t keep. That’s how it’s supposed to be. It’s good.
We buried Clara in a garden. It’s called the Love Garden and her spot used to be beneath an enormous oak tree that a hurricane has since taken down. I have scant memories of that day.  There were so many loved ones who came. My grandmothers were there. The ducks were there too. The geese. The squirrels. A butterfly. There’s on one her stone as well: “Every day was a gift.” The funeral home misspelled the word. Everyday. Every Day. Either way, it’s true. 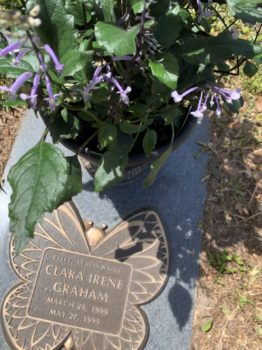 Every day was a gift.

When I tell Clara’s story, it’s meant as a gift. She isn’t her would-be twenty years old. She’s eternal. The light of her soul is still here, still there, still inside me, still all over. So many others have also “lost” their children. Their tiny seedling babies. Infant death happens to many families who don’t know how to mark occasions. They don’t know how to tell their stories and how to make it normal. Sometimes they prefer to hold the secret. I get that. To each their own. There’s always a point in the telling: an uncomfortable moment when the listener inevitably struggles with what to say. When faces go red. I won’t avoid that by saying I have four children. I have five. She came here. She happened. She changed me. It’s okay to not know what to say.  We don’t have to always have words.
The next time you see a butterfly, try saying hello. It’s a harbinger of one who is maybe coming along, to say hello, or I love you, or everything will be okay. She’s always right you know. It is.
Every birthday and death-day I wonder how I’ll mark it. Sometimes I share a photo. Sometimes it’s just a note. I guess maybe one year I won’t at all. I doubt it though. Good things always come when I tell anyone even a piece of Clara’s story. She’s generous with her impact. For a baby born with a broken heart, she’s touched so many through the years. She taught me early how talking about her was the way to hold her memory eternal. And, it’s been interesting to observe how grief morphs through the years. How it takes a different form, softens, rises. I can still tear up at the memory of pain. But perspective, time— these are real. I can’t hold any one of my babies still, held fast in time. They grew, they changed, they changed me, they still do. It’s true of all five. Somehow that makes me less sad. It’s so normal. So ordinary. So much an accepted part of life.
Happy Birthday, Clara Irene. Her name means clarity and every time I ask her for it, she delivers. As the book says, “I’ll love you forever, I’ll like you for always. As long as I’m living, my baby you’ll be.”
****
Postscript: If you’ve experienced the loss of an infant and would like to share your story in a public way, I’m interested in publishing a collection. Please use the contact form or the comments to reach me.

I was young and vulnerable when my first baby was

I think this isn’t gendered. However, historical

The first mild air of the season, on the third day

When I asked for thoughts on 19 Kids and Counting,

So many stories poured into my DMs of older siblin

Sometimes I lay crystals out to recharge them with